In the early 1970's, Leeds University, in Great Britain, embarked on a program that asked the question, "What do hydroxyl radicals do?" A University study found that, the activity of atmospheric hydroxyls was responsible for neutralizing some 2500 atmospheric chemicals by way of some 7000 reactions. For this reason, hydroxyl radicals found in the atmosphere have been called "nature's detergent”

Hydroxyl radicals also attack the porous cell walls of bacteria and viruses which destroys them through the process known as cell lysing. Human, animal and plant cells are "Designed" to be in the sunlight and have cell walls that are less porous and are not harmed by atmospheric hydroxyl radicals.
- Source : Primer on Hydroxyl Radicals (www.alidade-mer.com)

OH Radical has proven its stability through a number of domestic and international organizations such as the Ministry of Food and Drug Administration.

Official letter of the NIEHS, USA : OH Radical is No harmful to human health.

Definition of OH radical by Korean Food and Drug Administration :
It is a heterogeneous oxygen-anionic material that is generated by applying energy to the hydroxyl group (OH). It has excellent oxidizing power and is harmless to the human body.

Correlation between OH radicals and air purification in the atmosphere

Gas-phase radical chemistry in the troposphere

Atmospheric free radicals are low concentration, relatively fast reacting species whose influence is felt throughout the atmosphere. Reactive radicals have a key role in maintaining a balanced atmospheric composition through their central function in controlling the oxidative capacity of the atmosphere. In this tutorial review, the chemistry of three main groups of atmospheric radicals HOX, NOX and XOX ( X=C2, Br, I ) are examined in terms of their sources, interconversions and sinks. Key examples of the chemistry are given for each group of radicals in their atmospheric context.

Scientist say they have detected wide swings and, most recently, a sharp drop in atmospheric concentrations of chemicals that naturally purge the air of many kinds of contaminants and methane, a powerful heat-trapping greenhouse gas.
The scientists say they suspect that the decline is related to human activity, because the biggest drop was measured in the northern hemisphere, where most industry and other human activity is concentrated.
The researchers, who described their work in today's issue of the journal Science, said there were still many uncertainties involved in calculating amounts of the molecules. 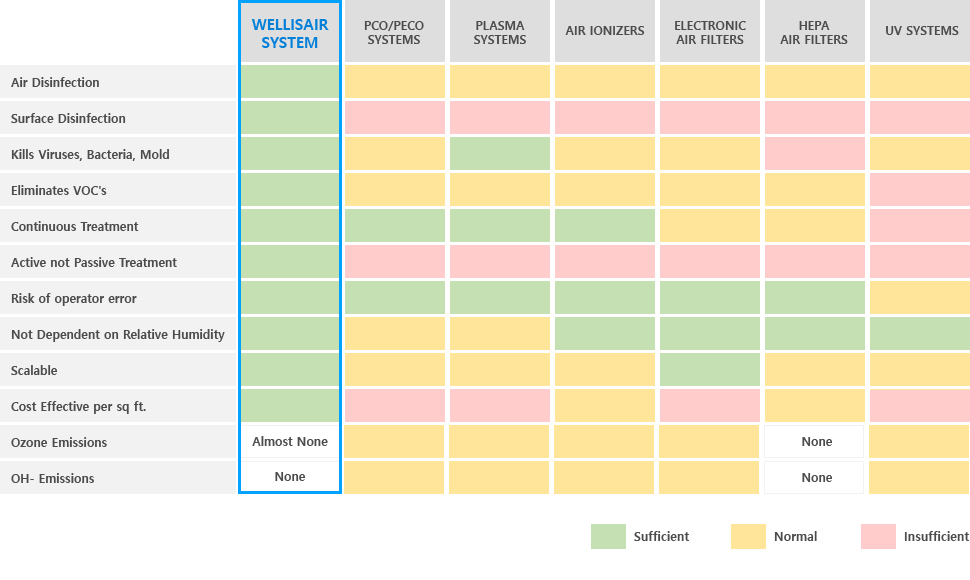 WellisAir only generates OH neutral, and OH- reacts with oxidation to metal such as jewelry or dental braces or cause some type of infection and side effects.
In the case of the photocatalytic method and plasma ionizer using TiO2, the sterilization effect is relatively limited as it is a passive method that removes contaminants from the air introduced into the interior space. On the other hand, in the case of the active solution of Wellis, it is much more advantageous for active air purification as it occurs approximately 5 to 10 times above, and it is possible to sanitize the surface of objects. (COVID-19 can survive in metal surfaces for a long time)

OH radical removes hydrogen from the proteins that surround harmful bacteria and various viruses such as the corona virus to destroy the protein structure and remove harmful microorganisms. Then, it converts them into H2O molecules that are harmless to the human body. 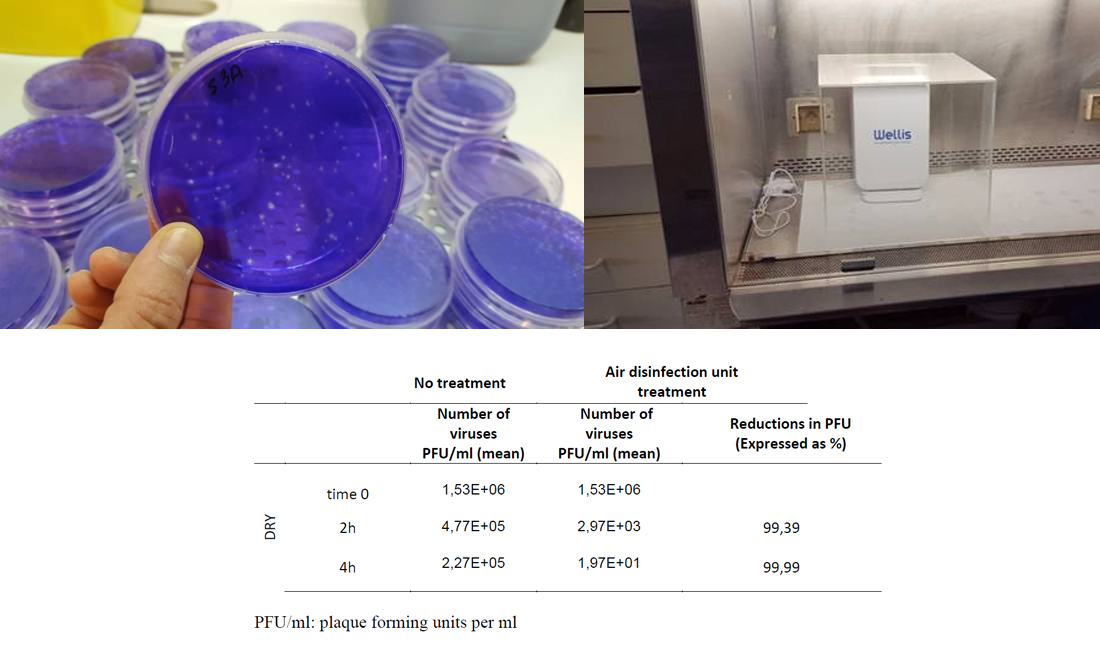 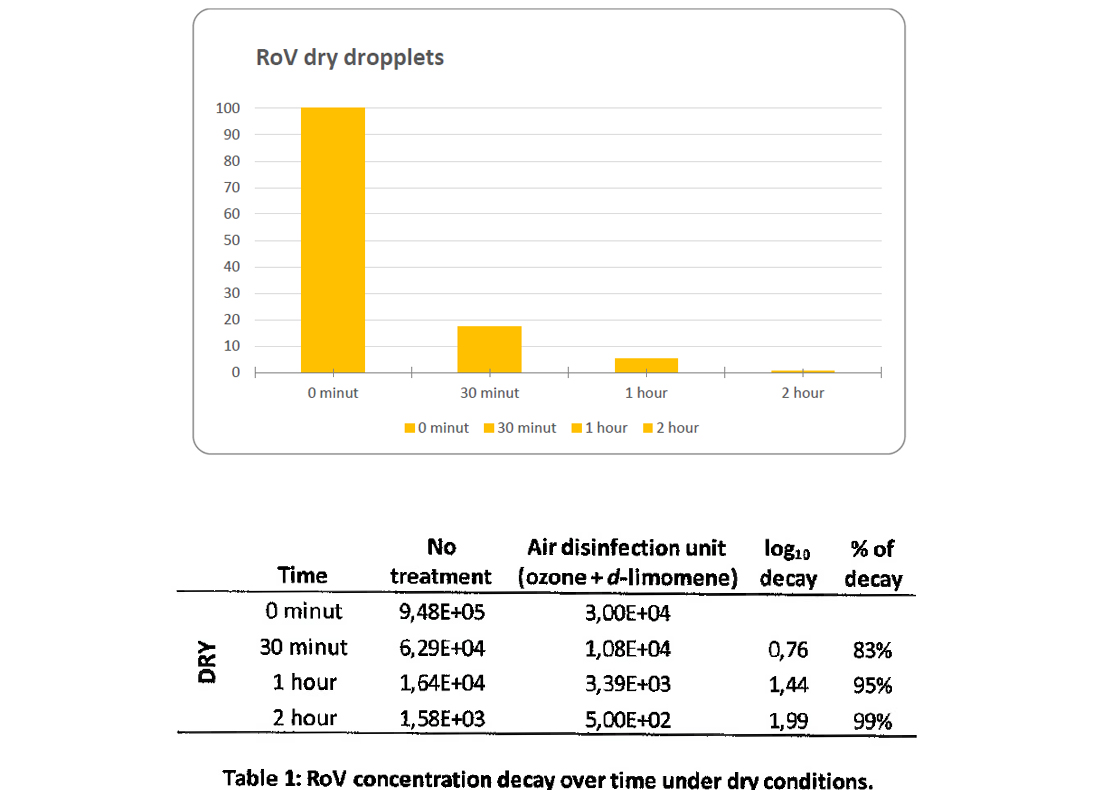 As a result of various virus tests with the Wellis Disinfection Purifier (WADU-02), it was confirmed that up to 99% was removed within 2 hours. At present, it is difficult to directly test the COVID-19, and the effect against COVID-19 can be inferred according to the results of the RSV virus with 92% similarity.